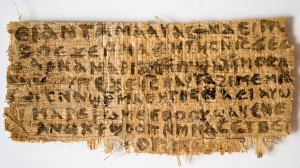 The first time that I saw a good image of this papyrus (early fall of 2012), I was suspicious about its authenticity and told my wisdom lit class (which happened to ask about it one evening, during a class in the early fall of 2012) that I believed it to be a probable modern forgery….the ink and the script just didn’t look right to me. That’s still the way that I feel. I have worked in Sahidic Coptic for ca. twenty years, having studied it formally during my doctoral program and having taught it recently at the graduate level. Moreover, I’ve read pretty heavily in the Nag Hammadi Corpus as well. And Hellenistic Greek is also in my wheelhouse, as are ancient inscriptions in general.

As for the laboratory tests, the carbon tests on the papyrus demonstrate that the papyrus is ancient. That’s no surprise. Just as modern forgers of ostraca use ancient pottery sherds for their logia, so also a modern forger of a papyrus inscription would use some ancient papyrus (which, although certainly not as readily available as pottery, is still available….with or without ancient ink). It should be emphasized that papyrus was often reused (note the phenomenon of palimpsests) and so the putative date for the papyrus itself (prior to the Common Era) is not an important issue at all, neither for authenticity, nor against authenticity. It is an absolute non-issue. Also, the fact that the “ink” used on this is consistent with the chemical composition of ancient ink is also not necessarily evidence for antiquity. After all, the chemical composition of ancient “ink” has been known for some time and the chemicals available in antiquity are certainly still available today. Thus, the chemical composition of the ink is not necessarily an argument in favor of authenticity. Also, it is also possible for someone to scrape off (e.g., from a papyrus) ancient ink from the words of some mundane ancient inscription….and then add a little water to the dried ink which had been scrapped off and then resuse the ink. Some people (including some scholars) assume that modern forgers are not all that bright (and thus would not be that clever in forging something). In contrast, I believe that modern forgers (at least from the final quarter of the 20th century and on) are quite sharp…..and for good reason they try to be very clever: after all, there is much money to be made and modern forgers knows this….so, as for this piece, I remain very suspicious of its authenticity. Perhaps it’s ancient….but I doubt it.

I should also note that if it turns out that Jesus of Nazareth was married (i.e., if some good, credible, first century evidence comes to light at some point in the future and demonstrates this), that sounds fine to me. In other words, I have no theological objections to this sort of thing. My concerns about this papyrus (which is later than the first century CE anyway), are only epigraphic in nature. I have no vested interest one way or the other.